Overwhelming pentagon stage around you, miraculous thrill with music flowing all over the body, and performances that bring all fantasy to real.

When you enter the 5tardium, unforgettable and supernatural world leads you.

The pentagon, previously not found all over the world, links each of 5 stages together and
encircling the audience to present them another magical world cut off from the outside.

Global top EDM artists representing each genre have their performances on 5 stages in two days.

Experience the miraculous thrill through the exploding live stages and wonderful performances.

Look forward to the 5 performance teams that will guide you to fantastic experience. 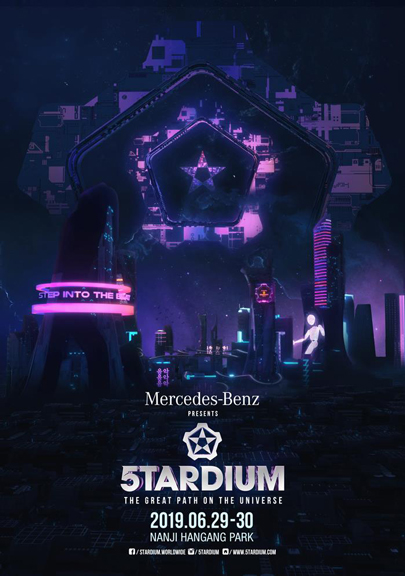 STARGAZERS: THE GREATH PATH ON THE UNIVERSE

The most surreal and iconic EDM festival of South Korea ‘5TARDIUM’ unveiled its magnificent new stage designs and production for its 6th year show with Mercedes-Benz Korea. In partnering with Europe’s one of the finest visual production companies, KBK Visuals, 5TARDIUM brought a true “star-gazing” moment for its audience. 360 degree surrounded arena with five stages symbolizing outer space architecture, 5TARDIUM created a completely new and artistic visuals for festival experience. VOLUMEUNIT, the organizers and licensee of 5TARDIUM, announced this year’s key word as “STARGZERS” to represent the audience who will participate on the journey of 5TARDIUM throughout. To celebrate its remarkable journey of the past 6 years, 5TARDIUM also brought forth 12 genre artists for the first time spread over the two days on the last week of June weekend. VOLUMEUNIT also announced that it has added brand new performances to enrich the festival experience for all of the fans and audience who have shown great support and love for 5TARDIUM. 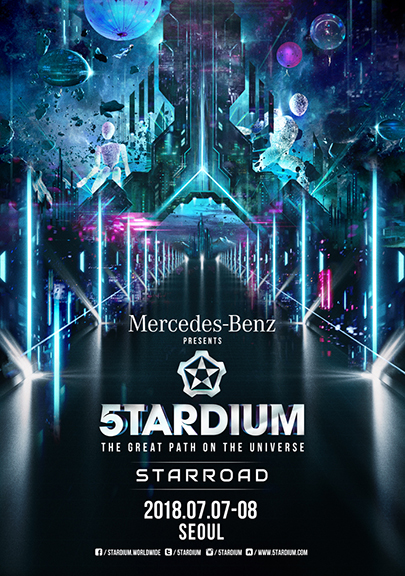 STAR ROAD : THE GREAT PATH ON THE UNIVERSE 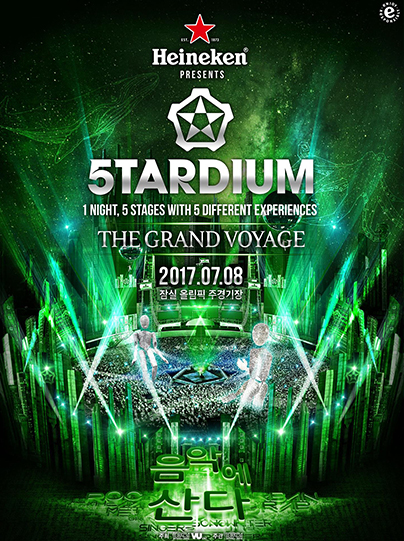 'Heineken Stadium' 2017, which celebrated its 4th anniversary, showed that more than 90% of tickets are already sold before the lineup is announced. It means the concept, not the lineup, is enough to make the festival a success. The theme of ‘THE GRAND VOYAGE’ captures the audience with a variety of interactive elements that cannot be experienced in any festival. The enhanced DJ line-up also fulfilled the fans' expectations for the Heineken Stadium. DJs who have created their own unique style in EDM Scene around the world. Chris Lake, Nu: Tone, SPY, Alison Wonderland, and Dannic & Arty, representing five different EDM genres, have satisfied both audiences and critics. In particular, about 10 minutes between the day’s last performance, Heineken Moment maximized the impression of the spectators gathered on the spot with the laser which draws a huge green star on stage. 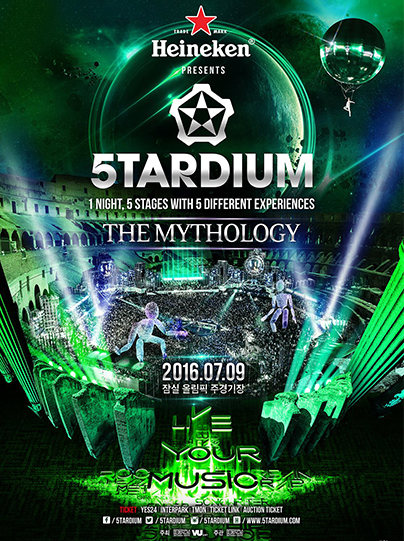 ‘Heineken Present 5TARDIUM’, which celebrated its third anniversary in 2016, presented fantastic experience to S.Korea’s EDM fans once again with the motto “Five amazing experiences in five stages”. Especially 2016’s theme ‘THE MYTHOLOGY’ provided the perfect stage and sound to meet the expectation of fans under more powerful and dreamlike theme ever. The Heineken Present 5TARDIUM, which made 25,000 audience enthusiastic previous year, had been rated as the world’s first five stage stages, with a huge pentagon shape and a special stage presentation surrounding the audience. Furthermore, the high-quality EDM sound introduced by DJs, representing the five different EDM genres, was evaluated as a festival that broadened domestic EDM awareness limited to club music. 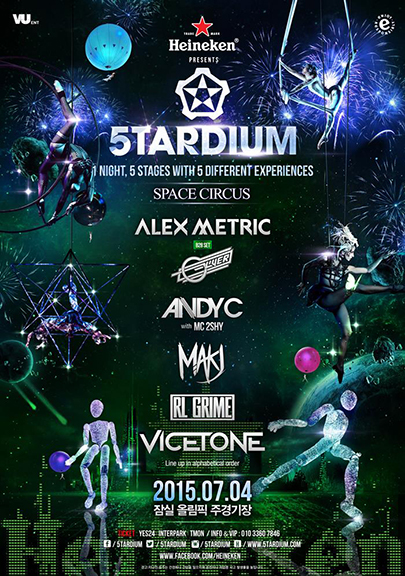 The 2015 Heineken presents 5tardium was held in Seoul Jamsil Sports Complex Main stadium on July 4th, with the theme of “Space Circus”. More than 25 thousand people attended and enjoyed the festival. Artists in 2015 were “Alex Metric & Oliver” with funky groove and never-stop rhythmic disco, “RL Grime” with the hottest EDM genre trap, “Andy C” with drum and base, “MAK J” with electro house, and DJ duo “VICETONE” with progressive house. After the exciting performance of “MAK J”, green laser beam shot from the 5 stages formed a gigantic star above the audience’s head followed by the massive fireworks for the finale. Audiences fascinated by the splendid performance and highly satisfied for the sense of unity with the event. 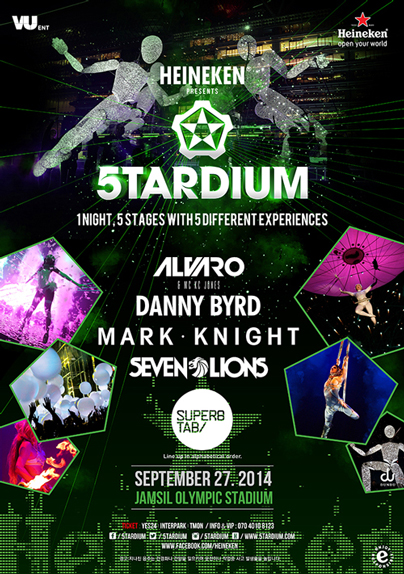